Traditionally, the history of the early Muslim conquests of Tukharistan is based on Arabic historical narratives compiled during the early Abbasid period. However, they are written in Arabic by Muslim figures for Arabic speaking audiences within a particular framework to represent an ideal image of the past, which do not necessarily accurately record it. They highlight early Muslim characters and their achievements and engage less with issues related to the social and political structures practiced in the region. 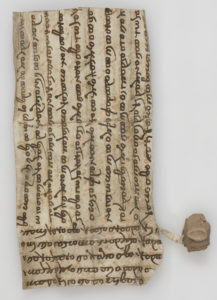 Fortunately, the discovery of Bactrian documents from Tukharistan fills this gap to some extent. They are in Bactrian, the only Middle Iranian language written in cursive Greek script and cover a long period from 312 CE to 772 CE. The themes of these documents are varied from administrative, economic and legal documents, to private letters. Linguistically, they present original Bactrian “compositions” produced in Tukharistan, and historically they reflect the socio-political situation before and after the early Muslims conquests.

In particular, social laws and regulations reflected in these documents display a set of cultural features that are not mentioned in any other sources. Socially, free persons and slaves are the two main identification markers, and the household as a fundamental unit is highlighted. Cohabitation, fraternal polyandry (two or more brothers married the same wife) and joint ownership were the established custom. Slavery was common and men could possess young women as concubines, if they could afford it. However, a married woman had the privilege to decide for her sons, or officially receive fines if her husbands remarried another free woman without her consent.

Before the conquests, Tukharistan already experienced a sophisticated administrative bureaucracy. Written documents in two copies (open and closed parts) witnessed by adult freemen, and sealed by governmental authorities were essential for all legal and economic deals. Variety in form, layout, structural formulae and sealing patterns show a completely different set of practices. In contrast to how it has been imagined, Tukharistan was not an extension of the Sasanian administration, but modified inherited Achaemenid and Hellenistic systems developed further under the Kushans and the dynasties after that. Similarly, Bactrian documents represent the names of old Iranian deities such as Waksh and Ram-set and include other deities names known to the region from the Kushan period, again setting them apart makes from Sasanian Zoroastrianism.

Hence, Bactrian documents are essential to study the early Islamic history of Tukharistan. They inform us about the region’s socio-political context at the time of the early Muslim conquests.

← When is an Arab not an Arab?
Hide and Seek: Forms of Protection in Early Islam →