Hide and Seek: Forms of Protection in Early Islam 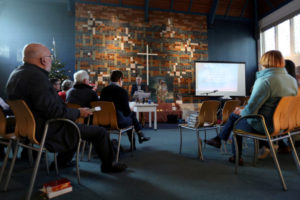 A protestant church holds round-the-clock sermons in an attempt to prevent the extradition of an Armenian family of political refugees, in The Hague, the Netherlands December 13, 2018. REUTERS/Eva Plevier/File Photo

Recently, an unusual religious service was held in Bethel church, The Hague. Reverends from all over the Netherlands held a constant service in order to protect five members of an Armenian family, facing deportation back to their country. The family took refuge in the church for three months, thanks to Dutch law which determines that state authorities cannot interrupt a religious service. They finally received an asylum status.

People taking refuge from the state is not a new phenomenon, and the case above has similarities in the early Islamic empire. The EmCo team has been thinking a lot about fugitives and protection recently, largely as a result of conversations with our colleague, Eline Scheerlinck, who is writing her PhD thesis on Coptic protection letters.

We discussed such cases during a conference we hosted here in Leiden (that we will publish as an edited volume). In this conference, scholars of the early Islamicate world were encouraged to look for different types of protection in their sources. In order to share material about parallel practices among the inhabitants of the early Islamic empire participants presented material in Pahlavī, Arabic, Judeo-Arabic Greek, Coptic and Sogdian. I will present here an overview of the themes and examples that were presented during the meeting and the insights we gained from it.

Papyri from 8th-century Egypt, for example, reveal the efforts of the authorities to track down fugitives. In one case,  the governor accused the pagarch (district administrator) of hiding fugitives from state officials. We do not know whether these accusations were rightful, and whether the pagarchs and local headmen were actively hiding fugitives from the government or if it was private people who helped dislocated persons escape state officials. However, it is clear that the state tried to restrict movement in order to improve tax-collection. Since taxes were collected on a communal basis, it was crucial to keep people in place to contribute their share to the tax pool. Otherwise, the community as a whole would suffer an increased burden. This was as true for pagarchs in charge of a local tax-paying community, but they were less keen that fugitives from other districts who carried part of the fiscal burden in their district be sent back. This explains why the central authorities were chasing fugitives who might have been hidden or protected by local government officials. Today, many Europeans fear the influx of too many people, but for the state officials of early Islamic Egypt, it was a struggle to keep the population in place.

Protection, however, also took a more individual form. We have much evidence of individuals seeking a patron to help them with financial problems or to get them out of prison. Moreover, individuals and groups are also said to be saved by gaining protection in religious buildings or from private persecutors. In one interesting case, a woman hid a man under her cloth and saved him from potential harm by his persecutors (Fierro).

“Protection” is an understudied theme in the field of early Islam. It became clear from the conference that it was a key social and cultural mechanism, in which many people at the time took part. We also discovered that different forms of protection were offered in different contexts: Hiding someone from his or her persecutors is not the same as openly offering asylum. protection took different forms: safe passages (Scheerlinck), treaties after conquest (de la Vaissière), hiding places, and more. In all its forms it appears to play an important role in the arrangement of society, and by studying it more closely we can possibly uncover religious, social, political, and cultural norms, and raise questions related to various fields of study, such as gender, empire- building, and political and social history. It can tell us, for example, that women also played the role of protectors, and help to show their agency as active actors in society. Moreover, it shows that in the early Islamic empire people had certain expectations from their community and office-holders, and that these expectations included receiving protection in times of need, from either individuals, communal or authoritative institutions.