The Governor’s Orders, Part One

Have you ever wondered what the Arab conquests of Egypt meant for the average Egyptian villager? The following story takes place a few years after 700, in the countryside of Middle Egypt. It’s based on a Coptic document that belonged to the management of the country by the Arab-Muslim government.

This blog post was reposted on the Leiden Islam Blog. 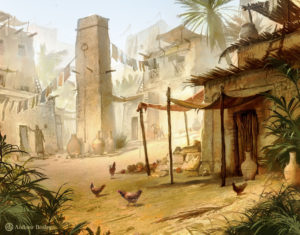 Shenoute was making his way through the village, hammer and nail in one hand, and the wretched letter in the other. As he headed for the church, a woman passed him by and looked at him questioningly. He’d been getting those looks from the villagers all day. They knew that this morning he was in the office of Basileios, the district administrator. A letter from the governor had arrived, and Shenoute and the other headmen of the villages in the district, had been summoned there to hear it. “They will know soon enough”, Shenoute thought, “and they are not going to like it”. The atmosphere around the village had been tense, since letters from the governor had been coming every month or so lately, and they never brought good news.

That morning, when he had arrived at the office of Basileios, the district administrator himself had not been in the room yet. As he greeted the office scribes, Shenoute immediately recognized the letter from the governor: a long strip of high quality papyrus, written in Arabic, the language of the amirs and amils who’d been running the country since the time of Shenoute’s grandparents. A scribe had just finished translating the letter to Greek and Coptic, for the benefit of Basileios and the village headmen, who, like Shenoute, didn’t know Arabic.

In a corner of the room, Shenoute had spotted Iohannes, headman of a neighboring village. His usual bored expression had made place for a preoccupied frown. Shenoute wanted to go over to greet him, but at that point Basileios had come in, followed by a man Shenoute had never seen before. He must be the messenger who had brought the letter, Shenoute thought.

Everyone fell silent as the scribe started to read the letter aloud. As Shenoute had expected, the governor was not happy, and he wrote, yet again, about the so-called “strangers” in Basileios’ district. They were immigrants from other districts, who had moved away and were not paying their taxes. The letter ordered Basileios to gather them and prepare them to be sent to the governor. The messenger who carried the letter, was to wait there until Basileios handed him the strangers, so that he could take them to the governor in the capital up North, where they would be punished.

The scribe reached the passage with the usual abuse and threats for Basileios if he wouldn’t do as told again: “You’re neglectful, you don’t value your life, I will crush your soul,” and so on. Shenoute glanced at Basileios, but his stony expression did not betray any emotion. Shenoute understood his own task from the letter: he, like the other village head men, would have to supply Basileios with a list of names of these so-called strangers, and the names of their wives and children, and the places where they had come from.

After the reading of the letter, a scribe handed him an abridged Coptic translation of it, to be pinned up on the church door and read aloud to the people in his village, so that they would know that those so-called strangers among them were to be sent away, by personal order of the highest authority in the country. And then, Shenoute reminded himself, he would be among the men responsible for rounding those poor people up and bringing them to Basileios’ office.

Lost in thoughts about the events of that morning and the contents of the letter, Shenoute didn’t notice that he’d almost reached the church. A small crowd was already waiting for him, and he tried to look confident and authoritative as he made his way to the church door. They watched as he nailed the letter to the door. He turned around and opened his mouth to speak.

Scholars tend to treat the Arab-Muslim government of Egypt, centered in the capital Fustat, and the villages in the countryside which it governed as two separate worlds. But, those worlds were integrated, and documents played an important part in that integration. The letter on which the story is based brings the words of the governor in the middle of the Egyptian village. In my next blog, read more about this specific document, its contents and how it testifies to the growing presence of the Arab-Muslim government in the Egyptian villages.