A police raid, a cache of letters, an inquisition, an execution. Sometimes you have to be careful what you write. 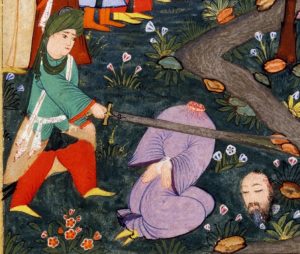 In 322 AH/ 934 CE, the house of a man known as al-Shalmaghānī was raided by the caliph’s men. They found a trove of incriminating letters which had been sent between the followers of al-Shalmaghānī. On the evidence of these letters an inquisition was mounted, and Shalmaghānī was flogged, decapitated and his body burnt at the police station in the west of Baghdad, along with his right-hand man.

The use of letters and documents as evidence is familiar to us from hundreds of police thrillers on TV and film. I work as part of a team investigating various uses of letters, and so the dramatic case of Shalmaghānī, which pivots on the investigation of letters, leapt out at me. What crime did these letters expose? In this case, the authorities were not pursuing a murderer, but men and women they regarded as heretics to be rooted out. In one of the letters, one of Shalmaghānī’s followers wrote:

So what is so wrong with this? This kind of language is very familiar from letters of the time, but there is something subtly wrong with it. Well, subtle to us maybe – but to the contemporary readers of these letters it was an outrage because of the conventional formulae they do not fulfill. I know this, because our project leader, Petra Sijpesteijn, is working on informal requests, petitions and begging letters in Arabic papyri, and has flagged the significance of letters which say things like “I rely upon God and then you.” In such a formula, although the immediate function might be to ask for money or assistance from a powerful man, Petra suggests that God must be inserted before the recipient in the formula to show that ultimately God should be considered as the primary source of bounty and aid in the world. Shalmaghānī’s followers were inverting conventional formulae: a violation of epistolary norms which slipped into heresy, placing mankind in God’s place: “I rely upon my master,” rather than “I rely on God.” This was not just bad manners: it was a capital offense. In another letter, the violation is even clearer as a mere mortal is addressed: “Praise be to you!” Such phrases were evidence that Shalmaghānī and his group held incarnationist beliefs, in which the divine was incarnate in various humans. For the ruling caliph of the time, and for many Muslims throughout history, a whiff of the idea that God might become incarnate in mortal matter was considered heretical.

If Shalmaghānī, or Muḥammad b. ʿAlī Ibn Abī al-ʿAzāqir, to give him his full name, had preached in an isolated village or mountain fastness, his doctrines might have not been so upsetting, but he was an influential government bureaucrat in Baghdad, at the heart of the crumbling ʿAbbasid caliphate, and a highly placed member of the Twelver Shiʿi community. That was, until his doctrines became public. Many people incorrectly think of the Sunnis and the Shiʿa as having been black-and-white enemies, but here is a case in which Sunni authorities and Twelver Shiʿa leaders collaborated to eliminate someone they both saw as a threat. Shalmaghānī had been an important scholar and agent in the Twelver community, but when the scandal emerged, he was excommunicated by leaders of the Twelver community. After this, he went into hiding, but after a decade in on the run, he emerged again and started gaining many supporters among the class of ʿAbbasid bureaucrats in Baghdad. At this moment, the caliph ordered his vizier, Ibn Muqla, to investigate the case. Although many people knew about his doctrines, Ibn Muqla wanted evidence. Shalmaghānī’s house was raided and the rest is history.

What can we learn from this? Well, firstly, that justice in tenth century Baghdad was not arbitrary. Accusations had to be substantiated with evidence. Though it is a commonplace to suggest that oral testimony was more important than written in pre-modern Islamic legal proceedings, it is clearly more complicated. Written evidence was presented as key evidence at Shalmaghānī’s inquisition. Another thing, which I have learnt from my colleagues in Leiden, is that conventional formulae are not meaningless, but carry with them a lot of information about how the relations between human beings are conceptualized. Epistolary formulae – like today’s “Dear Madam,” “Yours Sincerely,” or “Love from…” – can be highly significant for the wider ideological and social frameworks they tap into. This little light-bulb has shown me again how useful it is to work in an interdisciplinary team. Though I came to the story of Shalmaghānī to understand the internal struggles of Twelver Shiʿi politics for the purposes of my own book project, Agents of the Hidden Imam, Petra’s research into informal requests on papyrus has opened my eyes to another dimension of significance illuminated by this case. It shows how rulers and heretics share a social world through mechanisms like letters and the conventions used to write them.

(You will be able to read more about Shalmaghānī and the tangled world of tenth century Baghdad politics, in my forthcoming book, Agents of the Hidden Imam)

← The Governor’s Orders, Part One
Coming out of the Cave: Monks in Society in seventh and eighth Century Egypt →