The Diverse Processes of the Conquests of Sasanian Iran: The Example of the Region of Qom

When we use the term “Early Muslim Conquests,” we usually think of a one-way process: the Arabs taking a place with violence and causing disruption and without any cooperation from the local population. No doubt that was sometimes the case. But did the early Muslim “conquests” of Sasanian Iran follow this pattern? And what was the role of the local population in the process? In other words how did the locals’ reactions effect the conquests and their consequences?

The early Muslim “conquest” of Qom in modern-day Iran in the last decade of the 7th century is an example of local inhabitants’ cooperation that allowed gradual Arab-Muslim domination of the region. We can see this by comparing some Middle Persian documents found in the region dating to between 664/5 and 701 CE, with the Tarikh-i Qom (The History of Qom), a 14th-century Persian translation of a 10th-century Arabic text. 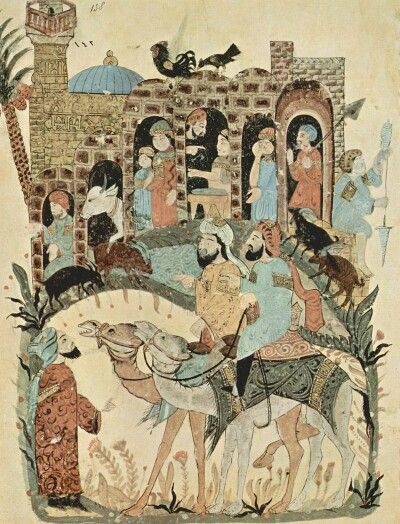 Tarikh-i Qom contains various narratives of the “conquest” of Qom. After analyzing them, it appears that the “conquest” of Qom was the result of negotiation between the Arabs and the local elites to serve shared interests. The Tarikh mentions that the people of Qom suffered from continuous attacks by the Daylamis from the north, during the wars between Ibn al-Zubayr (d. 692) and ʿAbd al-Malik (d. 705). The people of Qom built defensive walls, recruited men and collected money to stop the attacks. However, the Daylamis appeared again and again. At the same time, a group of Arabic emigrants from the Ashʿari tribe arrived in Qom in 700-701. They had been forced to leave Kufa in Iraq after having been found guilty of supporting the revolt of ʿAbd al-Raḥmān ibn Muḥammad ibn Ashʿath al-Kindī (d. 713). Hearing about their arrival, Yazdānfāḍār the local ruler of Abrashtejān, an area in Qom, welcomed them and arranged feasts for them. Soon after their arrival, the Daylamis appeared again, but this time they were defeated by the newly arrived Arab immigrants. The locals saw the Arab victory as an opportunity to make an alliance. Yazdānfāḍār requested the Arabs to stay in Qom and protect them from their enemies. In a treaty (ʿahd) signed between Yazdānfāḍār and the Arabs, the revenue of several villages were allocated for the benefit of the Arabs to support them in return for their protection.

Several Middle Persian documents dating from 664/5 to 701 from the region of Qom confirm this mutual relation between the Arabs and the locals following the arrival of Arabs in the region. One document refers to a feast that the locals arranged for the Arab amīr and his companions. Another document refers to a sheep delivered to an Arab amīr. Whether the feast and the delivery of the sheep were imposed by the amīr or whether the locals offered them to him willingly, these fiscal contributions reflect relations with the new force. Other documents show locals employed by the Arabs, like a local scribe working for an Arab amīr. More remarkably, one document shows that locals worked in and were responsible for the running of mosques. It refers to the local keeper of a mosque who contacted the Ostandār (governor). Another document contains a reference to locals donating materials to a mosque. Together these texts show a high level of cooperation, integration and mutual respect that is not often associated with “conquest”.

Tarikh-i Qom mentions that the Arab community lived in peace with the locals. This allowed them to become richer, investing their profits in the local economic and defensive infrastructure to the benefit of themselves and the local population. They made agricultural investments, such as the construction of Karizes (sing. Kariz, an underground water system) and designed gardens, built defensive walls, bridges, and dug a canal from the river to the city. The Arab rulers also brought an end to a long-standing dispute about the distribution of water among the areas around the upper reaches of the Qom river. In due time, some of the Arabs became rulers of Qom, collected taxes and owned estates.

Tarikh-i Qom shows that the settlement of the Arabs started a new phase in the history of Qom: the emergence of a joint community. The Arabs invested in the area by further developing the existing infrastructures or building new facilities. In return, the local inhabitants contributed by maintaining these infrastructures. While this situation clearly benefited both the incoming Arabs and the locals, the collaboration that it required does not generally come to mind when we think of “conquest” and the relation between conquerors and subjected people. The success and stability of the Arab take-over can be shown by the outcome: eventually the Arab-Muslim community dominated the region and gradually absorbed local communities.

The existing sources on the early Muslim conquests suggest that the motives, methods, and outcomes of the conquests were shaped by different elements. They could have been violent in one place and peaceful in another. Generally, the domination of regions through agreements was preferred by the early Muslim generals. This would allow the extraction of wealth without getting involved in war and losing soldiers. Treaties were drawn up to mark the early Muslims’ areas of control or influence, and to ensure military supply. Likewise, these treaties allowed local rulers to maintain their social privileges under the new regime. Thus, agreement and collaboration seems to have been the actual pattern of the “conquests” in many regions of Sasanian Iran as the example of Qom suggests.

← Coming out of the Cave: Monks in Society in seventh and eighth Century Egypt
The Governor’s Orders, Part Two →