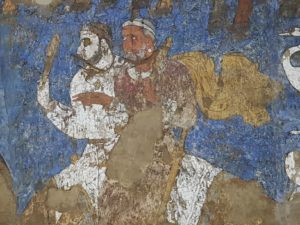 On September 17 and 18, 2020 we as EMCO Team organized our first online conference: Contesting Empires: Sogdiana, Bactria and Gandhara between the Sasanian empire, the Tang dynasty and the Muslim Caliphate (ca. 600-1000 CE). In preparing for the event we read several times that ‘an online conference is not a physical workshop that is moved online, but an entirely different event.’ We only fully understood the extent of that sentence when we started communicating about the upcoming workshop via social media. Our mailbox completely exploded, and we were overwhelmed with the positive responses that came from many directions.

Though we thought we already lived in a globalized world, and while interdisciplinary interaction was the aim of the conference right from the start, we apparently needed the travel restrictions caused by covid-19 to fully embrace the possibilities of international collaboration: A real eye-opener, thus! The amount of nationalities and affiliations in the virtual room was simply impressive. Of course, our goal was not that of ‘collecting’ nationalities, but to actually get and keep a dialogue going between fields that are so closely related, and yet still hardly seem to interact.

So why is that?

The first obstacle is language. To research the history of this super-multicultural vast area of Central Asia, one would ideally need to have an impressive language expertise. To uncover the mysteries of the rich past of this large and diverse region, one must consult sources in Arabic, Chinese, Persian, several Middle Iranian languages, like Bactrian, Sogdian, Middle Persian, Khwarazmi, and additionally some eastern Turkic languages. To a lesser extent, there is also information available in Sanskrit, Brahmi, Aramaic, Armenian, Greek, and Latin.

A second obstacle is the diversity of ‘information holders’: information about this region needs to be reconstructed from a large variety of different sources. There are documentary and literary sources, coins, seals, architectural remains, every-day and artistic objects, manuscripts, and more.

And thirdly: there is just so much of it! With such a long history, and so many thriving civilizations over the centuries, many artifacts from this area have survived time. Many are still waiting to be studied in detail.

These challenges all concern the source material of medieval times. Additionally, there are some modern-day problems as well.

Large parts of the region have been for a considerable time the theatre of civil wars and repeated military occupations. Traveling, excavations, or visiting existing collections are not necessarily easy, and sites are not always accessible. Documents and historical remains themselves have been endangered by conflict, social violence, and by the illegal antiquities trafficking. Ethical questions accompany the work of researchers of the region.

Additionally, scholars coming from many directions have taken an interest in this region. The main languages used for publishing their findings  are Russian, French, Japanese, English, Chinese, and Persian. So, even a true polyglot will probably feel that the amount of language skills that is required to understand the history of Central Asia, both for historical and modern languages, is rather daunting.

Researching this region thus becomes like making a jigsaw puzzle of countless pieces, of which you can only see a couple of pieces yourself. All the other pieces need to be put together by asking your fellow ‘puzzlers’ to describe the pieces they hold in their hands. The truth is, there is no other way, because the material available is simply too diverse and too complex for one scholar to oversee.

Such a large table, with many puzzlers each holding their own pieces, was in fact what we created at our workshop. The effect was amazing. Everyone was delighted to get a glance at materials they could not access before, due to either language barriers or insufficient knowledge of specific material features to look for (like, we discovered, in the case of coins). The greatly interesting Chinese documents Shuqi Jia and Jialong Liu discussed, the amazing coins that Pavel Lurje and Joe Cribb showed, and Robert Haug’s insights on the ever-shifting borders and affinities in the region which determined its internal dynamics—all were super inspiring.

The socio-political complexity of Central Asia is not something we discovered recently. It was in fact already addressed by Greek and Chinese historians centuries ago. Those historians, however, never explained the reasons behind that complexity: our EMCO team member Reza Huseini, bravely, did try to give some answers to long-standing questions by discussing the geographic diversity of central Asia and its position as a frontier zone between the contesting empires of the past. Furthermore, we were proud to be able to present three international and related projects: we heard about The Invisible East from Arezou Azad, Embedding Conquest from Petra Sijpesteijn, and Turks, texts and territory from Gabrielle van den Berg. And we were happy that the three project leaders, together with Hilde de Weerdt, leading the project Communication and Empire, could chair our various sessions and reflect on the papers that were presented.

Our keynote speaker Peter Frankopan opened the conference. He both complimented us on the nice variety of attendees and inspired us to follow and extend this line of research on Central Asia. It can be considered symbolic on several levels that upon joining us Peter had just finished chairing a multi-lateral meeting of finance ministers from Central Asia and beyond. After all, one of Peter’s main messages in his world-renowned book The Silk Roads: a New History of the World was that, if we want to understand global history, we should not consider the West as our starting point and as the centre of the world, but rather look at Central Asia for answers.

In short – after some initial technical hick-ups – we do feel that we should embrace Churchill’s one-liner ‘never let a good crisis go to waste.’ Being forced to move online, we are now proudly in possession of an impressive list of email addresses of people who showed an interest in our conference. All those attendees hold the jigsaw pieces that we need to reconstruct what happened in that frontier zone where the great empires of medieval times met and changed world history forever.

← Playing the CyberSultan: Videogames and the Islamic Empire
Fighting for wealth, power and prestige: Elites in the Early Muslim Caliphate →