Fighting for wealth, power and prestige: Elites in the Early Muslim Caliphate 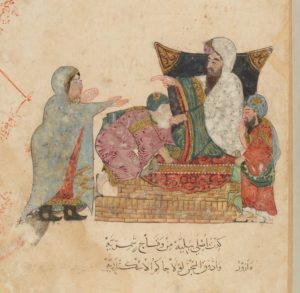 Patricians, upper stratum, ruling class, notables, and elite. These are only some of the terms that we come across when reading about the upper classes in the Medieval Caliphate. But does it make sense to use this modern day terminology to describe the structure of a society that existed a millennium ago? Or more general: How should we study elites in the early caliphate? Is there even such a social stratum that can be identified? Do members of that group all act In the same way? I asked myself these (and other) questions when I started working on a chapter I am writing now, discussing and analyzing the relationships and interactions between provincial governors and Arab Muslim elites in the provinces. Luckily, a publication dealing with the question of studying the elite in early Islam recently came out, and inspired me to deal with the abovementioned questions in more depth. Here, I will present several points from that book, especially from the Introduction by Stefan Heidemann, and from the article Studying Elites in Early Islamic History: Concepts and Terminology by Hannah-Lena Hagemann, Katharina Mewes, and Peter Verkinderen. Finally I will offer some insights from my own study.

What’s in a name? choosing the right terminology

The authors of the article raise many interesting and thought-provoking points regarding the study of early Islamic societies. They push us to think closely about the terms we apply to certain groups and individuals and the possible methodological and theoretical implications that come with such categorizations. One of the main problems of studying elites is the problem of terminology.  The authors note that scholarly tradition supplies us with multiple terms that are used in studying members of the higher social and political strata, such as the terms that we started this article with. There are, however, two serious problems with these scholarly terms: A.) they built upon and were used originally to describe specific historical cases and B) they have since then also become political and culturally loaded, which makes it hard for scholars today to keep using them. Furthermore they were developed in the West and are not always useful in describing and explaining the early caliphate, because they implicitly imply that the patterns we know from our Western society are somehow universal and can be applied to all other societies (and still make sense).

A second problem of terminology comes from our Medieval sources themselves. As Hagemann et al. assert, there are multiple Arabic terms that early Muslim historians use to describe members of the elite (such as ashrāf, wujūh, ruʾasā,ʾaʿyān). However, those historians were mainly interested in recording the lives of the urban elites, more specifically those who fulfilled an intellectual, a political/ military or a religious role in society.  As such they supply us with little or no evidence for the life of other types of elites, such as merchants, women, and rural elites. This problem is noted by Hagemann et al. and corresponds well with our own findings; The focus of our Embedding Conquest team is to study  non-literary sources like documents and (administrative, legal and private) letters and there indeed an entirely different landscape is uncovered, with much more ‘players’ in the upper classes than the ones originally described by the Arab historians.

Combining all the problems with using specialized terminology either in Arabic or Western languages, Hagemann et al. convincingly argue that the more general term “elites” is the least loaded and the most inclusive one, and therefore they suggest using it over other terms.

What does it mean to be an ‘elite’?

So now that the terminology has been established, it is time to see how it can be applied. What is it that make the elites, elites? And how does this affect their actions in practice?  We first have to bear in mind that elite groups are not at all monolithic. Hagemann et al. suggest using the term “elites” rather than discussing one “elite” group. Elites vary over time and place, and there are also hierarchies among them: a local leader/administrator of a village in the countryside would not, in most cases, be recognized as equal to an army general serving the governor’s court, for example. In other words, in order to be a member of the elite, one had to be recognized as such.

Elite members drew their prestige and privileges from different sources, such as financial wealth, ethnic and religious affiliation, or office holding. When Maslama b. Khalid, one of the army generals of Umayyad Egypt, was displeased with the reigning province’s governor and aspired to fulfill that post himself, he initiated a wafd (delegation) to the Umayyad caliph Mu‛awiya. His mission succeeded and he was appointed as the new governor of Egypt. He could only achieve this by using the prestige deriving from his position and his role in the conquests (and perhaps his own charisma); the fame he gained during the conquest period, his political network that came from being an Arab, a Muslim, and a  wealthy persona who fell under the patronage protection of the Umayyad family, made it possible for him to walk this road and establish his authority in this way. This  level of influence can hardly be compared to that of a local administrator in a village in the Egyptian countryside. The latter would  not have access to the caliph’s court. The villagers in his own village might look upon him as a powerful man, but the army top in Damascus would laugh at that notion. The interesting point here, however, is that notwithstanding their different roles and status in the empire, we can still discover many similarities in their actions and use of social-political institutions, despite their obvious difference in position and influence. Thus some patterns of gaining wealth, power and prestige are not confined to one group of elite, but can be studied in a much broader light.

Moreover, studying Umayyad Egypt reveals a competitive political arena, in which several elite families compete for the same offices in the province, mainly the roles of Chief Qadi and Chief of Police. We hear of rebellions and armed confrontations that broke out after one family lost its position in the office; other families than played a role in aiding the governor suppressing these rebellions. Since they were all part of the same milieu, of Arab-Muslims who settled in Egypt after its conquest, they drew their power from the same social, material, and political resources. What is interesting here, is that they seem to recognize each other as belonging to the same groups, and as rivals on those same resources of power.

In conclusion, we should acknowledge the multiplicity of elite groups, and study “elites” rather than one elite group. In order to understand who belonged to which group in the early caliphate, we need to look closely at the sources of their prestige and power; where did they draw this power from? And what did they try to achieve with their actions? It is the answer to these questions that can help us categorize within society specific groups that rivaled for these desired ‘commodities’  and as such, could be labeled as elites that were similar or shared their characteristics. When we understand their sources of power and their motivations, we might be able to answer questions on various topics such as their role in the administrative systems, the army, various institutions, rebellions, patronage, and politics. But in-depth studies, conceptualization, and theorization are still needed in our field before we can proceed to really judge the similarities and differences between this large and multi-layered  group we now call ‘elites’.