The Idea and Practice of Justice represented in Bactrian Documents 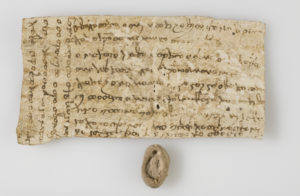 Bactrian Document no. 0125, letter of the steward to the commander of the fortress regarding the judgment made by the ruler related to the petition presented by Mihr-Guzg. Courtesy of The Khalili Collections, London.

What do we know about the idea and practice of justice in Bactria in late antiquity? The short answer is: not much. The scarcity of primary sources seems to have been the main obstacle that has made this subject unfamiliar to scholars of Iranian Studies. However, that reason is not valid anymore, because a number of Bactrian documents found in late antique Bactria (corresponding roughly to the northern region of modernday Afghanistan) provide firsthand information on this topic. These documents are written in Bactrian, the only Middle Iranian language inscribed in cursive Greek alphabet, and dated between the early 4th and the late 8th century. They are varied: from administrative, economic and legal documents, to official and private letters reflecting the socio-political circumstances in Bactria. These documents have been translated by professor Nicholas Sims-Williams and my understanding of these documents is largely indebted to his work.

For this short note, I have looked at several petitions presented to the authorities, and letters exchanged between officials reflecting issues related to justice. How did people seek judgments and from whom? What did they complain about? How were their petitions brought to the attention of the authorities, and how did the authorities reply to the petitions? Likewise, it is important know if there was any standard procedure for justice.

The earliest Bactrian documents relating to the issue of justice are four letters possibly produced in ca. 350 CE., in the Rob region of southern Bactria. Two of them highlight the importance of the commander of the fortress (lizbid, λιζοβιδο), who was responsible for ensuring that justice was carried out and was expected to be a just man (μαρδο λαδιγηιο). The commander was a military position stationed in the citadel/fortress within the city. He had several groups of armed guards under his command, which possibly functioned like the city police. He had authority to

investigate, make judgments, and punish culprits. Likewise, he had the power to prevent aggressive actions of government agents. In a letter to the commander, thesteward (farmalar, φαρομαλαρο), a non-military official, informed him that an agent named Sag entered the house of the Absigan family and disrespected the lady of the house and the inhabitants of the inner quarter. A certain Ohrmuzd, the weaver of damask, appealed to the steward asking for his help, but having no authority over the agent, the steward wrote to the commander to stop Sag. The steward had authority to a make judgment himself or to carry out the judgment already made by the ruler.

In another letter, the steward informed the commander that a certain Mihr-Guzg had appealed (πιδοοαυαδο) to the lord regarding the property of his partner. Mihr-Guzg may have claimed the property for himself. Then, the lord ordered him to pledge faith (οαοαρο) to him by making an oath (οαρο) with one man, perhaps a witness, and another man from Mihr-Guzg’s side. After making a judgment, the lord ordered the steward to look after them till the claimant presents his witnesses and give statement. Unable to do that personally, the steward wrote to the commander asking him to protect Mihr-Guzg from being accused, disputed, penalized or detained till a statement was made in the presence of the steward.

Several Bactrian letters exchanged between officials show that people were very concerned that their properties should not be disputed, claimed or damaged by others. The properties could have been inherited, purchased, given by the ruler, or gifted for good service. In a letter produced in the month of Sharewar 239 of the Bactrian calendar (which corresponds to December 561 or January 462 CE) in the Kadagstan region in eastern Bactria, Meyam “the king of the people of Kadag, and governor of Kadagstan”, loyal to the Sasanian king of kings Peroz, informed four officials that he had given some properties to a certain Shabur. Possibly, Shabur’s ownership was disputed by some people and he had to complain to the king for a judgment. As a result, the king ordered the officials that Shabur’s ownership over the properties was legal and no one should disturb him or dispute his ownership.

Similarly, some other Bactrian letters show that if government agents acted unjustly, then people complained to higher officials. For instance, if tax-collectors pressurized people or forcefully took their properties, people would appeal to the taxation authorities. If a steward or his friends forcefully used people for their personal work, then people would complain to the governor. If a stronger person disturbed people, deprived them of their rights, abused them or molested their women, people expected the authorities to protect them. They would complain individually or as a group. They would go to the local king or the governor directly and appeal. However, in most cases the petitions were brought to the attention of the local king or the governor by servants, or other lower authorities. The rulers’ treatment of the cases and their decisions reflected their concern about the petitions. Their reactions varied from simple instruction and friendly advice to warning and serious action. In most cases, letters bearing the ruler’s decisions were conveyed not to the petitioners but were sent to the related authorities where the petitioners came from. In some cases, requests would reach certain authorities through intermediaries, whose words were effective in ensuring that the task would be performed.

In a letter possibly written between ca. 380-466 CE., in the Rob region, Wind-Fruma-Yamsh informed Pidik the Persian Satrap that the ruler had bound (imprisoned) a certain Yamsh-Wanind. The sender was not in the position to approach the ruler directly, but expected the addressee to be able to help release that person. To secure his request, the sender reminds the addressee about the “bread and salt” (ναγανο οδο ναμιλγο) that they ate together in Rob. Eating “bread and salt” may have been rhetoric here to remind the addressee of the actual meeting he had with the sender in Rob. The feast they had together created ties that bound the two persons, and as a result, it created a sense of responsibility towards each other. The sender asked the addressee to write to the ruler so that he may release Yamsh-Wanind. If he does, then the sender will acknowledge the addressee’s action as a great favor and will repay it by doing something that pleases the addressee.

When regimes changed, people’s expectations for justice remained the same. That is, they expected the new rulers to be just and protect them from unlawful acts, and that the institutional channels for ensuring this protection would remain the same. Regime-change did not mean that local authorities lost their right to make judgments. A letter issued by Kilman, “the king of the people of Kadag and governor of Kadagstan,” loyal to the Yabghu of the Hephthalites, possibly written in ca. 485 CE, mentions that a certain Zhun-Bandag appealed to him saying that someone named Tos had taken some things from. Possibly, Zhun-Bandag did not pay his debt (παρο) and Tos took something from him that they did not agree. This led Zhund-Bandag to complain. Hence, Kilman ordered the addressees, who were officials, to take back the things from Tos and return them to Zhun-Bandag. It also warns the addressees not to do clandestine evil.

Some Bactrian letters apply the title of “judge” (λαδοβαρο) to the ruler, reflecting the interrelation between politics and justice. The ruler is always a person from an elite family in Bactrian documents, indicating that nobility was a fundamental element for being a ruler/judge. An undated sealing belonging to someone called “Spring” calls him the “just judge of Arzind” (ραρταγο αρζινδο λαδοβαρο). His portrait displays him with a crown, a diadem and a neckless made of a double row of pearls, suggesting that he was either a ruler or an important political figure. There is more evidence to suggest that judges were political figures in Bactria and that the performance of justice was characterized by certain systematic administrative procedures. The terms “justice” and “law” are also used synonymously in some Bactrian documents.

Several legal documents from Samingan in eastern Bactria and Guzgan in western Bactria written in the second half of the 7th century mention fines payable to the judge or judicial treasury (γαζνο λαδοβαραγγο). The legal documents written in ca. 693, 705 and 722 CE., in Guzgan, constantly refer to the judicial treasury. Usually, fines were paid to the royal treasury (γαζνο ραογανο) as mentioned in earlier legal documents. Possibly, by the second half of the 7th century, the court of law had a financial section that received the fines. In any case, these legal documents are witnessed and sealed by government agents, suggesting that they were associated with the system of governmental administration. After all, Bactrian documents (only some of which are discussed here) suggest that to the Bactrians, justice, which guaranteed security for their lives, their properties, their social positions and their honour, was provided by the government at all levels. Any act that could deprive people of these rights was considered unjust and unlawful. If the regime changed, people expected the new authorities to be just and perform justice for them. The government officials were the main performers of justice in Bactria. In times of need, people presented their petitions to the authorities directly or their messages were conveyed to the authorities by other officials. If necessary, people sent their requests or petitions through intermediaries and promised compensation to them.

The terminology for just, unjust, judge, law, unlawful, making judgment, and appealing, remained the same from the middle of the 4th century to the late 8th century. This highlights the continuity of these institutions in spite of regime-change. Also, the process in which a petition reached the authority and a judgment was remained the same. This reflects administrative and cultural continuities which mean that the concept of justice and its related procedures remained intact throughout this period. Equally important is that Bactrian documents relating to justice suggest the existence of a fixed “legal system” that had certain administrative procedures for presenting petitions and making judgments.

← Fighting for wealth, power and prestige: Elites in the Early Muslim Caliphate
Religious extremism is not limited to Islam or to the present.  →