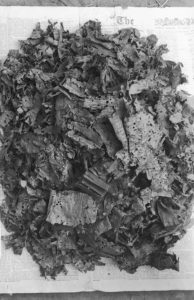 Fragments of letters on paper, potsherds, shards of stone. Documents piled in stacks, heaps, dumps. Inserted into a story, cited, copied, forged. Words passed from mouth to mouth, then crafted as booklets, scrolls, rolls, books. Bits of words compressed into digitized images. Sometimes pasted and squeezed into the covers, the bindings, the corners of books. Sometimes scraped out of human bodies. A piece of camel bone, a robe, a tombstone (like the ones we chose for our forthcoming “eye-opener.”) So much of our teamwork at EmCo starts with the materiality of texts. This means, firstly, that we pay attention to the object on which a text was transmitted. Texts come to us caught in plant fibers or animal skin. We dig with the philologist’s tools, mindful that each text might come out discomposed into layers (to be reassembled again at some point.) But caring for the documents’ materiality, the text with the object, the object with the text, means also that we are receptive to listening to their stories, still powerful enough to move and mobilize us.

That by handling documents we always handle human experiences, no matter how long ago a text was created, is the eye-opening realization I would like to share: Working with document collections, as we do, requires an enormous assumption of responsibility. Not only a responsibility of accuracy, honesty and sensibility before the texts and their ancient authors, before the objects and their producers, or before our colleagues and students. But responsibility also before the people and communities that our work with documentary heritages continues to affect.

Taking responsibility means, for a start, reflecting about how collections were formed. In a rising tide – long prepared but perhaps accelerated by the contingencies of the pandemic, including a scholarly community suddenly freer to meet outside visa constraints – the past two years have seen the explosion of new work rethinking engagement with material culture. Among many events, there were the launch of the Qatar-based “Himaya Project” on the illegal circulation of documents taken away from Middle Eastern libraries and archives; and the first dissemination of results from the “Egypt’s Dispersed Heritage” project. Many have started considering together the two main modes of heritage dispersal, through illegal and legalized channels, rather than separately. The public debate on repatriation has possibly never been more open than it currently is. Public and academic institutions are being held accountable to a renewed extent.

As for the EmCo team, we are directly involved in various ways. A large part of the documents we study were acquired and moved outside the Middle East during the imperialist, the colonial, and the mandate periods (as it is the case, for instance, with the majority of Egyptian papyri now outside Egypt). Many documents and manuscripts became accessible after being illegally acquired; many are of uncertain provenance, meaning that we cannot trace their steps continuously. This is a basic, fundamental fact of our work as historians and documents experts, which however does not always receive the necessary acknowledgment. 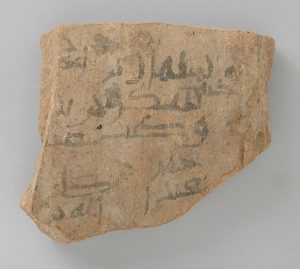 But the need to acknowledge past events is only one side of the problem. As I see it, our responsibility is as much about considering the documents’ past life (including their travels and diasporas) as it is about their use in the present and about the possibility of entirely new approaches in the future. It is not enough to recognize the existence of frameworks (such as colonialism) that we may willfully situate and leave in the past. Thus, the attitude of colonial powers towards the people and cultures of the places they occupied or controlled is not simply separable from the attitude of scholars and collectors, locals and westerners, who took an interest in those documents before we did; we still rely on their work of systematization and musealization. Nor is it separable from the history of the institutions (museums, libraries, departments, etc.) in which that specialized study took shape; we still work within those institutions. We know through the work of generations of anthropologists and historians that both the fields we operate in and their subject matter developed in relation to imperialist, colonialist, and nationalist discourses and enterprises. After at least 40 years of scholarship and many books, these are now widely shared assumptions in Area Studies. Yet, it is doubtful that the important interventions of scholars of colonialism and decolonization have structurally altered the day-to-day work on documents from pre-modern societies in fields such as classics, papyrology, late antiquity, or Islamic history. Scholarship about premodern societies is both anchored in the study of documents and resistant to self-reflection about their use. Meanwhile, incidents that expose all the fragility of our fields—such as the 2019 scandal about the Oxhyrhynchus papyri thefts, or the ongoing creation of the so-called “Afghan Geniza” collection—are still often framed as isolated and exceptional, or exceptionally complicated, cases.

On a daily basis, our work keeps raising ethical questions. Does the desire to study the history of past societies, for all its positive outcomes, justify the use of documents which we know or suspect were criminally trafficked? Does the urge to publish a text and make it available to a broader audience dispense us from first dealing with its provenance? Under what circumstances when working with specific collections do we allow ourselves to turn a blind eye to violations of human rights by the governments or institutions which hold, own, or control access to those collections? No matter our research focus, the more we engage with our sources as material, movable, and lived objects, the more unsustainable it becomes to eschew such questions. They intersect both sides of the problem, as I have presented it: the formation of collections (private or public) and their continuous existence and use. Both aspects and temporalities include illegal as well as perfectly legal acquisitions. 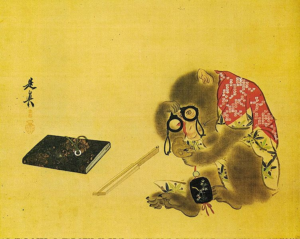 Then there are also other, maybe more hidden considerations of method, which equally affect our relationship with the documents, particularly when they are part of collections. On this further level, working with collections entails also facing that their shape might influence our research questions. Is it significant, for example, that we write imperial histories also relying on collections created by individuals who were personally invested in both the study and the actualization of empires? A collection’s arrangement might influence what we think about historical developments. For instance, the choices made by the first Egyptologists, in particular their “classicist” bias when selecting documents, still affect the way people think about multilingualism in the early Islamic empire. In my research, I have found that the way in which past generations dealt with collections of non-Arabic texts has indirectly facilitated the infiltration of anti-Arab and/or Islamophobic prejudices in late-antique scholarship. A collection might also shape our understanding of individual texts. And what about the impact of those mental structures we bring “pre-made” into our research, thinking about our sources already as stratified items to be dug up and revealed, like in the archeological metaphor I used above?

In January, we will have the opportunity to discuss the challenges of working with collections with a fantastic group of researchers in the fields of classics, late antiquity, history, art history, and cultural heritage studies: Alison Gascoigne, Monica Hanna, Luise Loges, Roberta Mazza, Filiz Tütüncü Çağlar, Mathura Umachandran, Donna Yates, Usama Gad, Robert Parthesius, and Josef Ženka. In the roundtable, we will discuss our direct experiences with documents, from papyri to artifacts, artwork, and smuggled manuscripts. We will talk about particular obstacles and structural limitations that play out in our research, and about how we may contribute to devising solutions and moving forward.

← Religious extremism is not limited to Islam or to the present.
My Favourite Medieval Things, part I →