My Favourite Medieval Things, part I 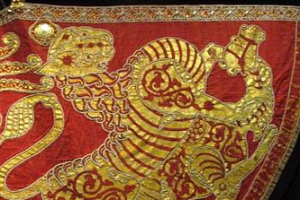 A while ago one of our team members, Ed Hayes, asked us an interesting question concerning material culture from the medieval Middle East. In order to prepare a lecture for undergraduate students, he wanted us to come up with our “top ten material sources relating to the Middle East between 600-1500.” There are a plethora of anthologies aimed at undergraduates which collect literary texts relating to the early Islamic middle east. But there is a gap in the market for an anthology that brings together carefully curated classroom-ready material-culture sources for introductory courses on early Islamic history.

When we put our heads together, this simple appeal for some convenient teaching materials turned out to be not simple at all! As researchers do, we immediately started sharing the links of digitized collections, but that was not really the point, of course! We all know there is plenty out there. When we read books on material culture, or visit the websites of museums, libraries and research projects we find a variety of useful repositories. (We made a collection of these on our Material Sources website.) The problem is that these all seem to work on the assumption that the users more or less know what they are looking for. But how can we inspire students or others who are new to the field to understand WHY broken glasses, torn textiles, or half-decayed pieces of papyrus are interesting and important? Or why, what seem to be ‘standard texts’ on buildings or objects, might in fact tell us much more than we see when we initially read them. Why, in other words, material objects – whether beautifully preserved or heavily damaged – are just as important as literary texts, and why they should in fact be studied alongside one another, much more than is the case now. Even though our team members use material sources on a daily basis, we often forget to really tell their stories! We assume that others will see the value and awkward beauty of these pieces, but do they?

So, we decided to make a little round and ask everyone on the team to tell a short story about (one of) their “favorite medieval things.” If we manage to inspire you, please share your stories and inspire us in turn. We will start with two objects, but already have others waiting in line.

A bone fragment (7.5 x 6 cm), inscribed with black ink. It was found in the excavations of the monastery of Apa Thomas in Wadi Sarga , in the middle of Egypt, ca. 25 km south of modern Asyut. The fragment is held at the British Museum and will be published by Jennifer Cromwell.

Bone fragments used as writing material are very rare among the thousands of surviving documents of daily life in medieval Egypt. Most often papyrus, ceramic or limestone shards, and later paper are used. In this case, the scribe decided to write just one line, a Coptic standard expression used to begin letters: “Before all things (I greet you)”. Only the first words are visible, as the bone fragment has broken off. We see people practicing their penmanship, and letter writing in particular, more often in the documentary evidence. In fact, such a letter writing exercise from the same monastery as our bone fragment but written on a piece of ceramic, has been edited by Jennifer Cromwell.[1] Why our scribe (a monk?) decided to use the bone for his exercise we don’t know, it might be what he had on hand at that moment. However, it might be telling that he didn’t write more than one line, although there was still space on the fragment: did it turn out to be too difficult, did he give up? Yes, this bone fragment provokes more questions than it provides answers. But it lets us look through the tiniest crack into the life of its scribe. Asking those questions and peering through those cracks are among my favourite things about studying daily life documents of medieval people.

Coronation robe of Roger II (r. 1130-1154), Norman king of Sicily. Made in Sicily for the Christian Norman king Roger II (a couple of years after the coronation, in ca. 1134) by an “Arab” craftsman. It is made of beautiful red silk covered with gold, blue, red and white silk embroidery, decorated with precious stones, including garnets, rubies and sapphires, pearls, glass and enamel. Its visual decoration carries strong symbolism referring to the conquest and establishment of Christian Norman rule over Muslim Sicily – the imagery of a lion, symbol of Norman kings, attacking a camel, symbol of the Arab-Muslim rulers – but also representing the fusion of Arab-Greek/Norman, Christian-Muslim culture in Norman Sicily. A decorative rim of embroidered Arabic writing (tirāẓ) is used to a very successful aesthetic effect. The inscription reads: “This belongs to the articles worked in the royal workshop, (which has) flourished with fortune and honour, with industry and perfection, with might and merit, with (his) sanction and (his) prosperity, with magnanimity and majesty, with renown and beauty and the felicitous days and nights without cease or change, with honour and solicitude, with protection and defence, with success and certainty, with triumph and industry. In the (capital) city of Sicily in the year 528.” The date follows the Muslim hijra calendar, referring to the year 1133/1134. Despite its obvious references to its Arab-Muslim background the mantle was valued highly by later rulers – its current lining was added in the early 16th century. In fact several of Roger’s successors commissioned similar robes with Arabic calligraphic decorations and his own cloak continued in use as the adjustments from later periods show.

The mantle shows how intertwined and interdependent Mediterranean nations/rulers/dynasties/cultures were despite military opposition and perceived incompatibility. Roger II might have been unusual in his appreciation of knowledge and practice from his Arab-Islamic subjects and neighbours. However, such shared practices across perceived religious and political borders of daily life practices but also, as in this mantle, of powerful royal symbolism show that sharing and exchanging of practice was more common, went on despite contradictions and oppositions in other domains, and is a lot more complicated than we might think at first sight.