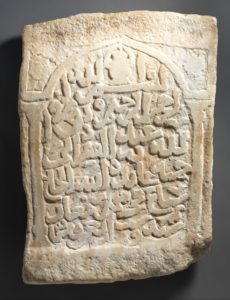 Here we continue our series on curious medieval objects that attracted our attention and that we enjoy using for teaching. This time inscriptions are central. Again if we look at these texts within their material context they offer ever richer views on the past and allow us to raise more complex historical questions.

A marble tombstone, probably from Egypt, that is inscribed twice. The oldest inscription is a Quranic citation in kufic script from the Fatimid period. The Quranic verse (Q. 3:18) is sometimes found on tombstones; at least two further examples come from Fatimid Cairo. The latest inscription, on the other side of the stone, was carved in naskh script for somebody who died in 646 AH (Ayyubid period). This second text is framed by an arch and columns. The object is now in the MET’s collection and exhibited in the Gallery dedicated to Islamic Egypt and Syria. Some information about its acquisition is available on the museum’s website.[1]

Tombstones touch on so many layers of human existence. They are mirrors of collective life—the life that we share through common spaces and repeated social practices—and of our personal stories, of family, affection, and separation. What we choose to write on a gravestone, which family names we record, which sacred verses we recite, can tell us much both about group dynamics and about individual experiences of binding and loss. Who paid for the inscription for the deceased Ayyubid woman? Who chose to frame the text under an arch, and what does that image symbolize? Who was buried next to her?

Historians study tombs because as objects they intersect a group’s shared religiosity, a society’s artistic sensibility, and a government’s urban politics. The transformation of urban spaces often causes cemeteries to be either moved, erased, or conversely enshrined. In the past like today, cemeteries are often politicized spaces. In the case of this object, we know that it moved at least twice. After being crafted and laid down one first time, it was readapted as a tomb marker about 200 years later, under a different ruling dynasty, in a city that had once more changed its face. What led to its reuse? And what about its removal from Egypt? How did this commemorative stone become a museum piece? How is an object such as this one transformed, from two old Islamic cemeteries to private ownership by Western collectors and then musealization? We care about tombstones because they force us to reflect about both the accidents and the politics of object reuse. They also remind us that our objects of study were real, living people, that we share with them at least our human fragility.

This Greek inscription dedicates the rebuilding of the hot baths in Ḥammat Gader to the Umayyad caliph Mu’awiya. It reads :

It is interesting to note that, though it is found so close to the Umayyad capital (about 110 Km from Damascus), mentions the name of an Umayyad governor (amir), and the Hijri date, it is nonetheless written in Greek. It thereby makes an interesting case study to understand the process of Arabization in the early Muslim empire. This inscription shows how other languages still flourished and were used, even in the name of state officials, even when taking the trouble of carving it into stone.

It also propels us to think of other concepts and issues regarding the nascent empire, namely the process of centralization of the empire. What were the responsibilities of the state, and what were the relations between the conquerors and the conquered?  The fact that the plaque was written in Greek, and that three different dating systems were employed, suggests that the baths were meant to be used by non-Arabs. Thus in this case it seems that this Arab governor, ‘Abd Allāh son of Abū Hāshim, took action in favor of the local population to rebuild a facility for the general public, and that this was considered a responsibility of the state. rather than a private venture.

Just in case you are intrigued by this Greek-islamic-state inscription as I was when I first found out about it: there are some great insights on the  debate of centralization in the early Muslim empire based on material evidence, in these two articles: