We continue our material objects blog with a third and final episode. So far, we have encountered a gravestone, a bone document, a cloak and a plaque with an inscription. All those objects showed multiple cultural influences creating layers of historical meaning. The objects discussed below similarly emphasise that divisions between cultures, or religious and social groups, are never clearcut. Ideas keep crossing the imaginary boundaries that we draw up, keeping us on guard to stay away from essentialising and stereotyping.

This is an image I found while researching my forthcoming book, Agents of the Hidden Imam: Forging Twelver Shiʿism, 850-950. It originates in the excavation of the Iraqi city of Samarra carried out by the German scholar, Ernst Herzfeld, at the beginning of the 20th century:

The image linked to above, shows an elaborately decorated cellar room in the house of the 10th and 11th Shiʿi Imams, with a doorway which leads to a well where the “Hidden Imam” of Twelver Shiʿism is said to have first gone into “Occultation” (ghayba). It bears a monumental inscription commissioned by the ʿAbbasid Caliph al-Nāṣir li-Dīn Allāh (d. 1225 CE). 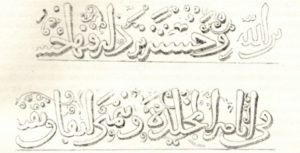 The existence of this inscription provides a strong reminder that modern views about a strict division between Shiʿism and Sunnism do not match the complex historical dynamics. The ʿAbbasid Caliphs are often thought of as “Sunni”(an idea that is true in some cases, but not in others) while the idea of the Hidden Imam is thought of as archetypally “Shiʿi”. But here we have an ʿAbbasid Caliph adorning the Hidden Imam’s shrine, apparently as a sign of his pious veneration of this messianic “Mahdi”, and as a way of connecting his own rule to this symbol of justice and hope. Of course, Sunnis and Shiʿa alike had long believed that a messianic Mahdi would come at the end of time to fight against evil. By the 13th century, in the absence of clear alternative identifications, it was fairly common for Sunnis to accept the Twelver claim that the Mahdi came from the line of the Imams, without accepting other aspects of Shiʿi doctrine or practice. In the inscription, the Caliph himself is honoured with very Shiʿi phraseology:

“This work was carried out according to the orders of our lord and our master, the Imam to whom all humans owe their obedience”

The caliph’s claims here are not dissonant with ʿAbbasid ideology in the longue durée. After all, the ʿAbbasids first came to power in the mid-eighth century, riding a great wave of Shiʿi hopes.

But there is a historical irony here too. The Twelfth Imam is said to have gone into miraculous hiding in this cellar as a child in the late 9th century CE. The reason? According to the earliest sources, he disappeared out of fear for his life from the persecution of the ʿAbbasid Caliph.

A clay sealing with the remains of thumbnail impressions, attached to an Arabic document now in the Khalili Collections in London. The document regarding the emancipation of a slave (ʿitq) was produced in 160H/777CE possibly in the region of Rob in southern Bactria, which was, at the time, part of the early Islamic empire. The sealings were impressed on a ball of wet clay, which was attached to the bottom of the document.

While looking at this little clay sealing and seven other similar sealed documents produced in the second half of the eight-century in the Rob region, many questions occupied my mind. Why the thumbnail impressions? What was the meaning of it? And what can I gather from this as a historian of late antiquity?

The answers lie within the documents themselves. These documents were legal documents: they were produced in the presence of witnesses including local authorities whose names are mentioned in the documents. The number of witnesses varies between 7 and 22 people, and often matches the number of thumbnail impressions and seals left on the clay sealings. This means that only the witnesses, as opposed to the parties involved in the transaction, pressed their thumbnails or seals on the clay sealings. In other words, the thumbnail impression was an act of validation of the document.

A close reading of Arabic and Bactrian documents produced in the same period in the Rob region, shows us that there was a meticulous record-keeping system, in which the main parties who made the deal were given a copy of the document, while another record was kept in a local government’s office for supervision. By placing their seal, the witnesses committed themselves to confirm the transaction recorded in the document in case of future disputes.

The thumbnail impressions are found not only on these eight Arabic documents. A Bactrian legal document produced in 726 CE in Khesh, an area between Bamiyan and Kabul, shows us that thumbnail impressions were an already known practice in the Bactrian legal system. This tradition originated in ancient Mesopotamia, where a special implement was used rather than actual fingernails. That tradition reached Bactria where it survived for centuries and continued under early Islamic rule in the east as a legitimised regulation for the validation of documents. Hence, a little clay sealing with thumbnail impressions becomes an object that holds valuable information on how a legal tradition travelled across and between cultures and outlived several regime changes within Bactria. More information on these seals can be found in the following readings:

In this series of blogs on “favorite medieval things”, we set ourselves the challenge to each come up with an artifact in which the text and the object that carries it, work together to enhance our understanding of history. We specifically looked for objects that could easily demonstrate to undergraduate students and other people new to the field that 1 + 1 can sometimes in fact add up to 3 if we study a text within its material context. When looking closely at an artifact, there is always more than one layer that we may ‘peel off’ as we look for stories, each layer holding new valuable information and many levels of meaning and engagement.  Objects from the past – from a royal robe to a simple clay seal – can indeed become an eye-opener.