A friend in need… part I 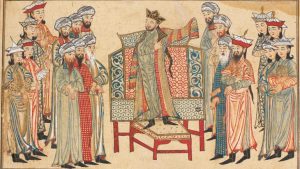 Mahmud of Ghazni receiving a richly decorated robe of honor from the caliph al-Qadir in 1000. Miniature from the Rashid al-Din’s Jami‘ al-Tawarikh. Edinburgh University Library.

The Emco team tries to understand the success of the early Islamic empire in its first four centuries.

One of the keys to that understanding is to apprehend what possibilities existed for people living in the empire to counter the problems they were faced with, and what perspectives society offered its different groups of inhabitants in times of crisis and calamity. Moments of crisis between individuals and the state uncover the complexities of what the empire was: in moments of need we can see more clearly the existence of social ties (such as kinship and tribal affiliation), mechanisms (such as letter-writing, imprisonment, and excommunication), legal instruments (like aman (safe-conduct)), and institutions, which people could use to solve their problems. But how did they do so?

One of our finds is that personal relations and social networks played an important role in the way these mechanisms, instruments, and institutions worked effectively for people and groups to get out of difficult situations. In the examples we explore in this blog series, we focus on the personal relations that people turned to in order to access existing legal or social structures; who could put in a good word for them? Who could supply food and necessities while imprisoned? Or who could talk to the caliph for them in order to achieve a safe-conduct? Looking at how people used their personal relations and social networks to interact with state representatives, we want to offer two important observations: (1) Initiative and individual action were essential in bailing people out of trouble. It did not suffice that certain institutions, mechanisms, or instruments existed: people had to actively invoke them to make them work. (2) Relations, although hierarchical, were never one-way affairs. Instead, they always show some form of mutual dependency, with those at lower levels of the hierarchy also being able to demand help or to collect the debt of help offered in the past.

This blog series will focus on the broad topic of how personal relations and social networks played a part in solving problems with the state. This first blog will start with an example of how rebels could access the existing legal instrument of amān (safe-conduct) by receiving help from their friends or family-members as a direct channel to the caliph himself in the aftermath of the rebellion of ‘Abdallah b. al-Jarud. Future blogs in this series include a Christian churchman trying to get himself released from prison through letter-writing, exposing his familiarity with the legal system and asking his friends for help; a group of Sogdian converts appealing to the Turks to avoid Umayyad poll-tax imposition; and a 10th-century letter of complaints about the local Imam in an Egyptian town. We start here with the example of the aftermath of the rebellion of ‘Abdallah b. al-Jarud.

Case study I: The rebellion of ‘Abdallah b. al-Jarud

In the year 76/695, several men found themselves in a life-threatening situation. They belonged to the Iraqi elites (ashraf) that rebelled against the famous Umayyad governor al-Hajjaj. In his Ansab al-ashraf, al-Baladhuri (d. 892 CE) tells us about this rebellion and its aftermath. After the governor suppressed the rebellion, he beheaded and crucified its leaders (led by a person named ‘Abdallah b. al-Jarud) while the vast majority of the rebels were granted an amān by al-Hajjaj. The elites that are the focus of this blog were not among those who received an amān (safe-conduct) and thus they had to run away from al-Hajjaj’s wrath and looked for ways to access the caliph ‘Abd al-Malik and get his protection. As such they will serve us here as a case-study to understand the relations between the legal instrument of amān and the personal relations involved in getting access to it.

So what could people do after losing a battle against one of the most notorious figures in early Islam, a man that was known for being merciless? When it became clear for this particular group of men that they would not be granted safe-conduct by the governor indeed they found themselves in a life-threatening situation. Some of them had to flee and hide in safe places as a short-term solution, highlighting the importance of having a social network one could rely on in times of difficulty. From their hiding-places they concentrated their efforts on achieving access to the legal instrument at their disposal: safe-conduct (amān). They might have failed to get amān from the governor, but there was still a higher authority that could overrule that verdict: the caliph himself!

It quickly becomes clear that personal relations and social networks played a crucial role in achieving the amān from the caliph. In some cases, it was their host who intervened and used his connections in the caliphal court to ask for the amān. Another way for asking the caliph’s aid was to “collect a favor”: a certain ‘Ikrimah, for example, reminded the caliph of a time when the caliph’s forces in Iraq had needed to be sheltered, and he, Ikrimah, had stepped up and aided them. This shows us how networks of social-connections and patronage were not a one-way street, when even the caliph, who was the most powerful man in the empire by definition, had to rely on local supporters. Clearly, Ikrimah was now hoping that his former loyalty would pay off.

Help could also be provided by one’s family connections. Such was the case of Ibn Dabian b. Sa‘id, who relied on his wife’s connections. Lucky for him, his wife was a friend of the caliph’s wife (we do not know which one of them). She approached the caliph’s wife, who in turn asked the caliph ‘Abd al-Malik to guarantee for Ibn Dabian’s safety, successfully leading to amān for the latter. We don’t know how the two women were related, but the closeness between them very probably saved Ibn Dabian’s life. Familial structures such as marriage thus created opportunities for people to work the system and invoke particular legal instruments in times of need.

Even in the hardest situations, people who had been able to establish the right social networks could use it to save themselves; they had places to hide, friends and family to shelter with, and people who could protect them. Networks were needed to be able to address a higher level within the political structure (and in our case even the highest political office). What is more, this case is a very good example of how legal instruments and social networks interacted. The existence of the concept of amān was not enough to bail these men out of trouble. The men had to find ways to ‘activate’ this legal tool and for that, they needed their social network. The eye-opening quality of this case-study is thus that the Islamic empire was not merely the sum of its ideologies, institutions, and symbolic acts, but rather the combination of all these aspects with human interaction. Historical actors did not only serve existing imperial structures, but rather they also invented and tried to shape those structures to their own advantage. And indeed, active problem-solving is what we find in the sources.

← A medieval Chinese passport?
A Friend in Need… part II →