How to ask? Strategies of entreating in medieval Eurasia. 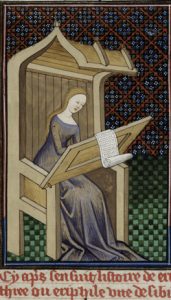 Our conference How to ask? Strategies of entreating in medieval Eurasia looked at how letter writers in medieval Eurasia tried to convince someone else to do something. What arguments did they use? What sentiments and values did they refer to? What pressure could they exert? We invited experts on different regions – Europe, the Middle East, and China – and languages to discuss examples of requests and entreats. What similarities and what differences could we discover between these epistolary cultural domains?

The scope that people would petition about was very large also within cultures; it ranged from simple ‘house-hold’ requests to attempts to get honorary jobs at court. From letters on papyrus, paper, potsherds or parchment retrieved in excavations to letters preserved in chronicles, epistolary manuals, imperial archives, and biographies, we found that they had much in common. Most letters were organized in similar ways and rhetorical features overlapped. At the same time each culture, or indeed each group within a culture, had its own conventions as well. This turned the conference into an exciting mix of recognition on the one hand and surprise and amazement on the other.

The mutual acquaintance: intermediaries and intercession.

Many letters had in common their capacity to give access to social networks. Asking someone to contact a third person was an accepted custom to approach essential contacts. In other words: intercession via intermediaries played a large role in petitioning, in getting problems solved, and indeed in getting access to justice or fixing injustices.

Eline Scheerlinck and Cecilia Palombo presented a nice example: while travel-documents were common in early medieval Egypt, they were not standardized. Obtaining such travel documents sometimes required a request letter explaining a traveller’s particular case. Only through the right connections would one get access to the administration; without such connections a “passport” would probably remain out of reach. It was not much different in Song China, as we learned from Clara Luhn: recommending a junior for civil or military service was serious business. By endorsing a candidate, the senior sponsor was made legally responsible. Beverly Bossler further expanded the image of patron-solicitation letters, showing how vital the patronage system was to understand court culture in China. Petra Sijpesteijn showed how relations with others were invoked in Arabic papyrus letters of request, including recommendation letters. In short: intermediaries were key.

In most cases petitions were directed to someone higher up in the social hierarchy than the writer, in terms of either money or political power. The difference in status between petitioner and petitioned is clearly reflected in the language of the letter, and this was true for all the examples we discussed. Language could, however, also subvert hierarchical relations. Sometimes this was counterproductive as was the case for a civil servant in Antje Richter’s presentation: the Chinese emperor rejected his request to be relieved due to old age, possibly because the request was too frank. On the other hand, Florian Hartmann presented a model letter included in a Latin epistolary manual of a studying son who threatened he would die if his parents did not increase his stipend; apparently nobody felt that claim was impolite. Particularly interesting in terms of language was the letter presented by Antonella Liuzzo Scorpo. It was an exchange between European kings in which political reasoning and friendship claims were reflected in a constant switching between formal language and colloquial phrases.

Indeed, throughout the genre polite language was used also between equals and even when addressing someone lower in the hierarchy, but we should wonder if we can take such polite exchanges at face-value: Hannah-Lena Hagemann presented rebels who were courted by caliphs. But would all be reconciled and all former animosity forgotten?  The Coptic letters discussed by Maxime Thérond seem to have been exchanged between administrators that occupied similar positions: they opened extremely polite, humble and servile, but in the body of the text the language switched to directly formulated requests using the imperative. Such apparent paradoxes lead us to question how we should interpret authenticity.

A letter only worked if it fitted the situation: to be effective, it had to be phrased differently depending on the recipient. This could be in terms of social status, but – as Oded Zinger showed us – communication strategies were also partially gendered.

In all writing cultures we encountered the use of stock phrases, topoi, and ‘exaggerated’ language such as “my crime deserves death” (a general expression of modesty), “I am your humble servant” (used by a high-ranking official), or “I am dying of hunger” (while there is still money for paper and ink apparently). The use of stock phrases is not an indication that the writer lacked creativity or was not authentic, on the contrary, it shows that the writer was capable. Request letters, especially those circulating in elite networks, were composed with great care and attention. Thus a ‘good’ letter would not be a ‘standard’ letter, but it would certainly not be entirely original either; it would fulfill expectations in the arguments and images used and at the same time fit the specific occasion and situation. Aurélien Montel‘s example of a letter written by a local ruler to profess his loyalty to the new Umayyad caliph of al-Andalus had all the right ingredients, mixing praise, submission, and openness to collaborate. The letter fulfilled its purpose: the local ruler was embraced by the new caliph despite some clear signs of what could be regarded as opportunistic behaviour.

Within specific sub-sections of the corpus, we also found clear differences. So biblical expressions reinforced some of the letters (from the Cairo Geniza) addressed to Jewish women, while letters entreating the Twelver imams included hints to their religious role. Friendship was an important framework in Western kingly correspondence, while prestige based on descent played a role in the caliphate. Disease could be used by Chinese officials to plea for retirement, while Egyptian petitioners asking for alms emphasized they did not go around begging like others did. Such specifics would – undoubtedly – be immediately recognized and understood by the intended audience of the letter.

We did also find a clear difference between some of the original letters that ‘accidentally’ survived, like the letters on papyrus in Egypt, and the letters that were purposely archived, for example those in the Chinese imperial archive. While the Chinese letters remained humble throughout, many of the papyrus letters would change their tone in the body of the text. After exchanging the polite stock phrases, it would be quite normal to find imperatives. This issue needs more research, because the letters do not only reflect a different cultural background, additionally they exemplify different subsections of the genre; the letters on papyrus seem to represent the middle and upper middle classes, while the imperial archives reflect interaction within the high elite. While the elite petition letters were written by professional letter writers, the papyrus letters were not necessarily (though some were).

Additionally, we cannot be sure to what extent the letters that were copied in historical accounts, biographies, and epistolary handbooks were polished in the process of archiving them, or were openly made up as a didactic exercise. It is even possible that letters that were not polite enough never made it into the records as they did not fulfill certain expectations and models. Here again the issue of authenticity comes up – rather than considering this as falsification or a deceit, we concluded that context determined the shape our letters obtained. To understand our corpus, we need to study these letters within the context in which they circulated.

The letters’ careful craft brings us to the last common theme that we will reflect upon in this blog: whom these letters were meant for, and more specifically: were they public or private?

Request letters would generally be addressed to a specific person, possibly a friend or an administrator, but they could go up all the way to the highest leaders. Were these letters read in private, silently, or presented and read out loud in front of a larger audience? Jialong Liu‘s presentation discussed a letter concerning an attempt at bribery. The way the letter was written suggested this was not meant merely as private interaction; it almost read like a political statement. But without the entire context, we could only speculate on how to interpret such a document. The letters to the Twelver Imam discussed by Ed Hayes also seemed to be looking for an audience rather than reflecting private conversations. The pleas that the believers made held the middle between a request and a prayer. The answers of the imam implied a mix of charity and miracle. As such, the corpus of hagiographical reports concerning the imams’ lives seems much more about convincing an audience than about private interaction between the imam and the believer.

We wondered to what extent our letters would be commented on orally. Sometimes the letters are embedded in accounts indicating that the messenger would accompany the delivery with an oral report. And also the letters themselves occasionally refer to the messenger, with sentences like “you can trust the person that delivers this letter.” While our written sources do not reveal how exactly the letters would be delivered and read, the letters often seem to have been intended for much larger audiences than just the addressee. Many of the letters copied in books seem to have had a larger reach in mind as well and might have had some exemplary function. But exactly how the reader would perceive the letter and to what extent people would act upon such requests remain a bit of an enigma.

From all the historical writings that have survived to our time, in many ways letters are the most personal. In letters we read about the concerns of individuals and their attempts to improve their own situation through the help of others. This collaborative approach showed us that many concerns that individuals had were quite universal (financial trouble, political conflicts, limited opportunities for education, training and occupation, sickness and so on). The way to ask others for help showed clear similarities but was also shaped by cultural conventions and took different shapes according to time and place. We are sure we will continue our cross-cultural discussion in the field of medieval letter-writing!