A Friend in Need… Part III: Sogdian converts and their response to the Umayyad poll-tax (jizya) policy 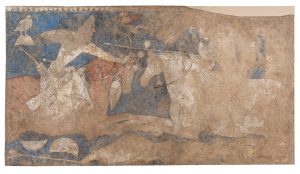 In the series “A Friend in Need” we examine the ability of individuals and groups in the early Islamic empire to tackle problems by using social and political relationships. Our two previous examples looked at local crises and individual solutions in the provinces of Iraq and Egypt, respectively. This third blog explores the reaction of a group of people to a crisis they faced because of the Umayyad government and its policies in the region of Sogdiana. It focuses on the case of a group of Sogdian Muslim converts, who resented the Umayyad poll-tax policy and appealed to the Türgesh Qaghan to protect them. They called on to the Türgesh Turks after being disappointed by the local Umayyad authorities, who ruled from Khurasan.

The episode reported in Arabic historical narrative, especially al-Ṭabari’s Tarikh al-rusul wa al-muluk (“History of Prophets and Kings”), shows a multidimensional mechanism of problem solving through political bargaining, which the converts employed to protect themselves from the Umayyads’ regional government. Moreover, it shows us that people’s solutions to local crises sometimes overlapped with bigger political problems and broader power games such as, in this case, the Umayyads’ difficulties in keeping control of the eastern frontier.

The problem began with the Umayyad military expansion in Sogdiana in the early 8th century. The Umayyad armies had forcefully incorporated Sogdiana to the empire, but soon they had to protect Sogdiana from the Türgesh forces, who contested the Umayyads’ rule in the region. To keep Sogdiana the Umayyads needed local supporters. Thus, they introduced conversion to Islam as a solution to increase the number of local Muslims. They exempted the recent converts from paying the poll-tax (jizya) and, as a result, large numbers of Sogdians converted to Islam. The Umayyads seem to have assumed that conversion could create solidarity between the Sogdians and the regional government, and, in fact, the narrative sources tell us that many of the converts supported the Umayyads’ rule in Sogdiana.

However, the policy of poll-tax exemption did not last long. Some Sogdian notables did not welcome it as they did not want more Muslims in their territory. Moreover, the policy decreased the notables’ income from taxes they collected locally. Under pressure from these local notables, the Umayyad governors of Khurasan re-imposed the poll-tax on all non-Arabs. This caused great anger among the Sogdian converts as well as among some Arab Muslim leaders. We are told that they gathered in Samarkand and protested; but their voices were not heard and their attempts at negotiating with the Umayyad governor failed. Instead, the Umayyads ruthlessly suppressed the protest and arrested its leaders, some of whom died in prison. Then, the poll-tax was re-imposed on the converts.

The protest by a coalition of recent converts and Arab Muslims can be considered a first strategy for tackling a moment of political crisis in Sogdiana. A second strategy mentioned by the literary sources was appealing to the intervention of the caliph in Syria.

The crisis in Sogdiana had not remained hidden from the caliph. Even before the Sogdian protest in Samarkand, the caliph Umar II (r. 717-720) had already been informed about the situation by a certain Abu al-Sayda. The latter had accompanied a delegation (wafd) sent to the caliph by the Umayyad governor of Khurasan, al-Jarrah b. Abd Allah al-Hakami (d. 730). The delegation supported the governor al-Hakami, but Abu al-Sayda did not: he informed the caliph of the converts’ problem and lamented the discrimination imposed by the Umayyad authorities in Sogdiana. In response, Umar ordered that the converts be exempted from paying the poll-tax. Yet, Khurasan was far away from Syria. It was a frontier region in which different political groups coexisted and the caliph’s decrees did not have much value. In practice, even the caliph could not help the Sogdian converts.

The disappointed Sogdian converts were therefore confronted with a critical situation. This deteriorated after the Umayyad governor in Khurasan decided to make the tax exemption conditional upon examination of the converts’ faith. Praying, reciting the Qur’an, and circumcision became basic requirements for demonstrating one’s conversion—which had not been the case earlier. And things got even worse: according to al-Ṭabari, the Umayyad administrators humiliated some members of the local Sogdian elite by tearing their clothes apart, putting belts on their neck, and taking the poll-tax payment from them by force. These events brought the Sogdian protest to new and unexpected levels.

At this point, the local elites opted for the most dangerous mechanism to oppose the regional government: they appealed to the Türgesh Qaghan and asked for protection. This was probably the first time that Muslims requested a non-Muslim ruler to save them from their coreligionist fellows. Subsequently, the Türgesh forces invaded Sogdiana and in a short time the very existence of the Umayyad authorities in the East was threatened. Put under pressure, the Umayyads finally abolished the poll-tax policy in Sogdiana; but it was too late.

The strategy adopted by the Sogdian converts to voice their discontent against the government by forging new political alliances with the Türgesh Qaghan brought them closer to other dissenters in the Umayyad East. The converts who had rebelled joined Harith b. Surayj (d. 746), who had started his own anti-Umayyad rebellion in the region of Bactria. Harith joined the converts with many other Arabs and non-Muslims. From Bactria, Harith’s forces invaded Marw, the centre of Umayyad authority in Khurasan. Although Harith’s rebellion was suppressed, his supporters, and particularly the angry Sogdian converts, continued fighting the Umayyads. They gathered around another figure, Abu Muslim al-Khurasani (d. 755), who took the situation into his hands and was able to put an end to Umayyad rule.

The story of the poll-tax policy implemented in Sogdiana and the resistance opposed by the local converts tells us a lot about the complicated political situation in the Umayyad East. On the Umayyads’ part, the initial policy of poll-tax exemption had been a strategy for coping with a political and military problem: they needed local converts for maintaining their authority against the challenge posed by the Türgesh. The Sogdian converts had welcomed this policy, whereas Sogdian local rulers and notables had opposed the increase in Muslim converts.

When they were forced to pay the poll tax, the Sogdian converts and their Arab-Muslim allies tried to solve the problem mainly through political bargaining: first by negotiating with the Umayyad authorities in the province, and then by approaching the caliph in Syria. Once they were disappointed by the Umayyads, they shifted sides and appealed to the Umayyad’s enemy: the Türgesh. They kept looking for political alliances, and this was the main strategy they adopted for obtaining what they wanted. They joined Harith’s anti-Umayyad rebellion in Bactria, and eventually supported the Abbasid revolution in Khurasan.

The narrative about the Sogdian converts’ rebellion thus shows us that they used different mechanisms, namely protest, negotiation, delegation, and finally appealing to another regional power, to relieve themselves of the Umayyad government. This multidimensional mechanism, from local protests to macroregional alliances, reflects the complexity of the political situation in the frontier region of Khurasan, where the Umayyads were only one political actor among many others.

← How to ask? Strategies of entreating in medieval Eurasia.