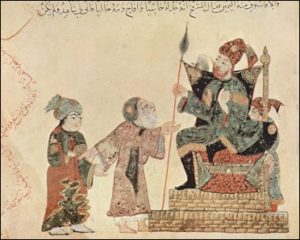 Abstracts and programme available. See below for the schedule.

Expectations and notions of just rule

In the Islamicate world, as elsewhere, requests for just rule surface constantly as notions of justice are debated and contested. Exemplary rule can be sought in direct and open ways, through entreaties and demands, but also subversively through irony, flattery and satire. Expectations of justice can be pursued through reform or revolution, or via secession, utopianism and millenarianism. This conference, organised in the framework of the ERC-funded project Embedding Conquest: Naturalising Muslim rule in the Islamic empire (600-1000), examines how such expectations of justice shaped political discourse and behaviour in the early and medieval caliphate (ca. 600-1500 CE).

Participants will present case studies discussing how just rule was defined and what actions and reactions it precipitated in specific historical, geographical and cultural contexts (local, regional and imperial). How was just rule or, conversely, the abuse of political power understood and defined? What solutions were at hand to redress unjust rule or to institute just rule? How was the call for just rule theorised, and what values (scriptural, moral, customary) were invoked? What concrete actions followed from them? Case studies may discuss single instances initiated by individuals (petitions, speeches, literary works) or groups (utopian settlements, revolts) or long-term initiatives (organised, large-scale, revolutionary movements, institutions and structures to implement just rule). Discussion is not limited to Muslim debates and initiatives but can include any group or individual in the Islamicate world.

The conference will be held online using ZOOM.
·        A ZOOM account is necessary to join the sessions (can be made with any email address for free)
·        Colleagues, students, and others are welcome to listen in and should register through: emco@hum.leidenuniv.nl to receive the link for the meeting.

10.15 Opening of the Conference
10:30 ENKI BAPTISTE ( Lyon-2 University)
In quest of justice: making and unmaking a ruler and the issue of violence in Ibāḍī political thought
11:10 OR AMIR (Hebrew University of Jerusalem)
The Sufi Shaykh as a Channel for Redressing Injustice in the Mamluk Sultanate
11.50 DEBORAH TOR (University of Notre Dame)
Expectations of Justice in the Late Seljuq Period: Case Studies in Petitioning the Ruler

13.00 SÉBASTIEN GARNIER (CNRS)
Policing the ruler. The ṣāliḥ in al-Tiǧānī’s Riḥla
13.40 NOËMIE LUCAS (University of Edinburgh)
‘He who tortures people in this world, God will torture him on the Day of Resurrection’: Taxation narratives in the development of a literary discourse on good governance
14:20 ANGELA ISOLDI (Radboud University)
A case of illegal manipulation of an endowed property

17.00 KEYNOTE: NASRIN ASKARI (University of Birmingham)
The Perso-Islamic Ideas and Ideal of kingship

11:00 opening of the conference

11:10 HANNAH-LENA HAGEMANN & ALON DAR (Universität Hamburg)
‘The World Will Not Forgive Their Misdeeds’: Rebellion as Response to Injustice
11.50 CHRISTIAN MAUDER (University of Bergen)
Taxes, Advice Literature, and the Sultan’s Wrath: Emotional History and Competing Notions of Just Rule at the Mamluk Court of Qāniṣawh al-Ghawrī (r. 1501–1516)