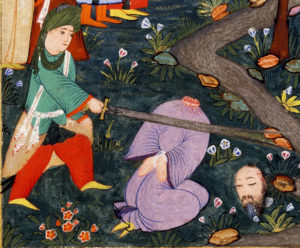 Scholars of Judaism, Christianity, Zoroastrianism and Islam often study excommunication in separate silos, developing separate vocabularies and models. However, during the early Islamic period, these communities shared space and ideas. When compared, various contexts (theology, ritual, eschatology, social mores) indicate isomorphisms which suggest that different religious communities were as connected as they were divided.

Excommunication is a tool of coercion, and as such, it deserves to be studied in comparative context which might highlight the operation of intersecting power dynamics in society.

This workshop aims to move beyond the idea that acts of excommunication were purely the result of theological issues. Instead, we will explore acts of excommunication as social and political as well as religious practice, with important implications for activities in local communities, but also for interactions with wider society and with governing authorities within the early Islamic empire.

While the theological, doctrinal and legal backdrop are important, an act of excommunication does not simply flow from the conceptual force of a doctrinal transgression, but rather the act is situated within a set of overlapping fields which may include economic, institutional, familial, political, ethnic, linguistic and generational aspects. These fields, in turn, contributed to how an act of excommunication came to be interpreted and positioned within evolving systems of law, theology and doctrine.

The programme will be published soon.

Please register by filling out this form.