Call for Papers: Ties of Kinship and the Early Islamic Empire

Ties of Kinship and the Early Islamic Empire 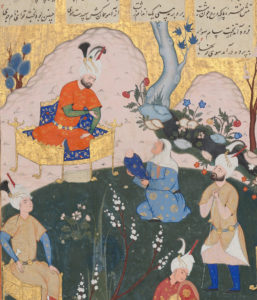 Birth of Zal, from a copy of the Shahnama (TheMet collection, open-access)

We invite submissions for an international conference on the language of kinship in Islamic(ate) societies before the modern period (622–1500 CE). The Embedding Conquest (EmCo) team has been investigating the social, political, administrative, religious, and economic ties that sustained strategies and mechanics of protection and dependency in the early Islamic empire, contributing to shaping imperial rule under the Umayyads and the Abbasids. As part of our project, we study how writers and document producers expressed vertical and horizontal relationships, including the use of family terms. We now invite other researchers to join in our conversation focusing on relational ties that were expressed primarily through or as kinship. This international meeting will be a venue for presenting new studies about practices, categories, and discourses through which kinship might

(i) connect individuals and groups to one another

(ii) contribute to binding an empire (or other large political entity) together.

We are interested in exploring how and when the language of kinship was implemented as a persuasive device, an operative category, and a problem-solving mechanism in premodern Islamic(ate) societies. When did the writers of our sources deploy kinship to describe or create group solidarity? What alternatives to kinship were used, instead, as a basis for expressing social cohesion? When was kinship construed for making claims? When was kinship invoked, and when was it deliberately omitted?

The conference will revolve around three major themes:

We invite presentations showcasing new historical research and look for case-studies that may also address broader historical questions, fitting in any of those three themes. We aim at a collaborative discussion about expressions of kinship and social or political relationships, including relationships giving cohesion to state institutions, empires, or dynasties, while also allowing for alternative definitions of kinship and contested visions of empire. Presenters may either focus on particular contexts or take on the approach of comparative, interconnected, or global histories. We welcome a serious engagement with questions of method and/or theory, and we encourage the participants to be aware of recent anthropological perspectives on kinship. Important work on kinship, gender and reproduction in the modern Middle East has been conducted by Soraya Altorki, Soraya Tremayne, Soheila Shahshahani, and others. Authors who have recently engaged with kinship in historical studies of premodern societies include Jessica Coope, Eve Krakowski, and Martina Deuchler. Among ongoing research projects centered on kinship, we would like to signal one based at the University of Bristol and one based at the University of Haifa.

Interested speakers should submit an abstract (300 words) and a short bio to emco@hum.leidenuniv.nl by 31 March 2021. We welcome submissions from leading and junior scholars, advanced graduate students, and independent researchers. In the hopeful scenario in which it will be possible to travel and convene in person in Leiden, the organizers will cover the travel and accommodation expenses of confirmed participants, for the purposes and duration of the conference only. The organizers are committed to gathering a diverse group of presenters and will strive to give more visibility to the work of scholars from traditionally underrepresented groups in academia.

Note: Confirmed presenters will be asked to share a draft version of their presentations for pre-circulation among the participants a month before the conference. Selected papers will be published in a volume after the conference.