CFP: A matter of speech: language of social interdependency in the early Islamicate empire (600 – 1500)

For the final conference of the Embedding Conquest: Naturalising Muslim Rule in the Early Islamic Empire (600-1000) project we will focus on the rhetoric of social dependency. How is language used to describe, establish, cancel, exploit, and manipulate relationships in the early Islamicate empire? We want to examine how relationships between individuals, and between and within groups, are referred to, and how other forms of solidarity underwriting social cohesion are cultivated and perpetuated. 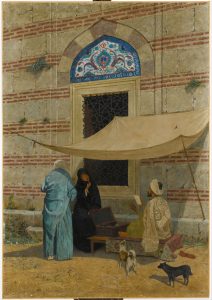 What words, expressions and visual tools are used to frame social relationships? And how are they employed to initiate, operationalise and maintain those relationships? How are connections between groups and individuals defined and how are those formulations implemented to shape and manage, but also end, such associations? How is language employed to establish ties by labelling relationships in organised ways and invoking commonalities and shared experiences that confirm the presence or absence of connections and how are these used to realise tactical goals?

We invite papers in which a specific act of speech or communication – a sermon, letter, petition or public address – or other linguistic production – poem, instructive or didactic text – is analysed for the ways in which connections between the interlocutors – speaker and hearer, reader or audience – and other social relationships – between individuals, kinship relations, within and between groups – are expressed and deployed for rhetorical and instrumental purposes.

Beyond the words that are used, we are also interested in material aspects, such as the way speech is presented on the writing surface through calligraphy, ornamentation, layout, in public and private contexts and how this contributes to the presentation of links and bonds. Papers that focus on materiality are welcomed.

The conference will take place at Leiden University from 8-10 December 2022 We intend to publish the conference papers in a volume as an outcome of this conference.