Workshop: Networks and Ties of Exchange: Trade and Merchants across the pre-modern Middle East (600-1600 CE) 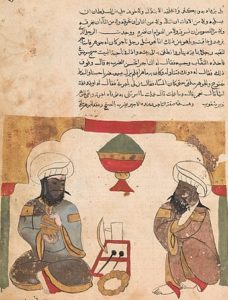 To register for this workshop, send an email to: emco@hum.leidenuniv.nl.

This two-day workshop presents recent research about trade in the pre-modern period by looking at a variety of practices and institutions. Taking the Islamic Middle East as our observation point to examine global trade in the first millennium and the middle ages, we wish to highlight social, cultural and economic ties created and sustained through material exchanges. The main goal of our workshop is to put an international group of scholars in conversation by presenting ongoing research and new studies focusing on trade networks and patterns of exchange. We will discuss some of the most salient features of trans-regional trade in and across the Islamic Middle East, and look for trade’s impact on political events or processes. This will also allow us to investigate trade’s role in establishing, maintaining, or unmaking pre-modern empires.

In our discussion, we would like to approach mercantile networks by breaking with the traditional casting of Islamic economic and legal institutions as part of the “exceptionalism” debate. Generally speaking, the study of trade in the Islamic world has been often framed into a broader discussion about the premodern roots of modern capitalism, particularly its location in medieval Europe and its later “impact” on the Middle East. The discussion has been defined by long-standing debates about the “informality” and/or the “uncertainty” of pre-modern Islamic institutions, in particular when compared to those of medieval and early-modern Europe. As Maya Shatzmiller has recently highlighted, such debates include pre-modern trade’s place in various decline theories which stand behind a postulated “partying of the ways” between Islamic East and European West, from Henri Pirenne to Timur Koran and others. Even as Middle East historians reacted to its more conventional formulation, for instance by directly tackling the theory’s tenability for both trade and markets (e.g. Jessica Goldberg, Eduardo Manzano Moreno), the old question of an Islamic(ate) institutional exceptionalism continues to loom large in the literature. For instance, the debate over Pirenne’s divergence thesis continues to be invoked in many works on late antiquity, medieval and Byzantine history, especially those using archeological sources.

We want to move away from the “exceptionalism” debate in two ways. First, we invited our guest speakers to pay attention to the more granular level of practices, networks, and marketplaces. As research on trade in the pre-modern Middle East is still somewhat limited, we invite our guests to share their insights on any particular aspect of political, economic or intellectual history. Some of the questions that we are interested in exploring are: What can we say about the mercantile groups operating in the pre-modern Middle East? How could merchants form communities whose common interests and values extended throughout lands and empires, cutting through religious, ethnic and kinship identities? How did such sodalities contribute to lasting imperial structures? We ask our participants to bring forth material connections, including the exchange of goods, services, and knowledge. We strongly welcome studies including in the history of trade, besides merchants and government actors, also other less visible economic and political actors (e.g., including enslaved and imprisoned people, soldiers, businesswomen, and others).

At the same time, we would like to look at different geographies. In recent years, scholars have emphasized the role of medieval and early-modern merchants as connectors, cultural brokers, and agents of pre-modern forms of globalization. This second approach, in its turn, has largely centered on the Mediterranean as a spatial and a conceptual category, favoring comparisons and links between Europe and Islam. We asked our participants to present case-studies discussing similarities, parallelisms and contrasts as part of integrated, global, or connected histories; and exploring links positioned on other geographical axes than the traditional East-West divide as well as less-explored routes besides those centered in the Mediterranean  (e.g., the Red Sea, trans-Saharan, North Caucasian, South-East Asian, and others). How did trade in the Islamic caliphate/s integrate with exchange networks centered in other regions?

We encourage all participants to contribute to the discussion not only with novel case-studies but also with new perspectives and methodological insights. We hope that our meeting will offer the venue for showcasing ongoing research, creating new networks, and setting the basis for a shared and nuanced understanding of trade patterns in and with the Islamic caliphate/s.