With kind regards: convention, standards and breaking the rules in letter-writing’ 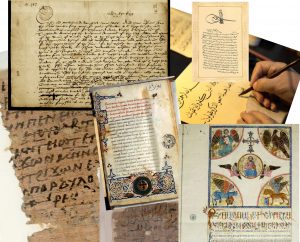 In 2022 we will organize a lecture series surrounding the theme: ‘With kind regards: convention, standards and breaking the rules in letter-writing’.

Whenever one writes a letter, one engages with different kinds of conventions: social conventions dictating the interaction between sender and addressee, like forms of address, appropriate contents, and suitable levels of formality; but also, conventions related to the medium and genre of the text, such as lay-out and formulae that are specific to the letter-genre. In practice, however, we find a lot of variation in the language use, and use of conventions in letters. Such variation can have numerous causes. The author’s education can play a role, the formality of the letter, the relationship between the sender and the addressee and the sender’s communicative goals.

In this lecture series we want to focus on variation in language use, and the use of conventions in letters from different regions and periods. What are the conventions in a specific cultural and linguistic area ? Do the senders of letters abide by them, or do they break them, and for what purpose? In other words: how do authors use conventions in language use and materiality to convey their message?

Lectures will take place on  Tuesdays  from 17.00 till 19.00, starting in March in the Library building.

Arietta Papaconstantinou (University of Oxford/ University of Reading): ‘Not very kind regards: Qurra b. Sharīk’s letters to Basileios and the limits of politeness’

In the study of epistolography the weight has overwhelmingly been put on the conventions and forms of address that aim to keep the exchanges civil and useful. This is the case in peer-to-peer letter exchanges, and even more in letters of request made either to superiors, or at least to individuals wielding some sort of power over the sender – be it the simple power to grant a request. An entire category of letters exists, however, that is unapologetically top-down and makes no concessions to norms of politeness and civility, making a show of raw power instead. Such letters are commonly associated with state institutions, and they tend to use the rhetoric of blame and manipulate emotions such as fear and pride, all the while brandishing such concepts as duty and obligation. The latter are so prominent in Qurra’s letters that they are often called ‘decrees’ by scholars. Yet in all sorts of ways they follow the conventions of the letter, in a tradition of power-writing that arose well before Islam.

In this talk, I will focus on the function and use of formulaic phrases in Dutch letters from the seventeenth and eighteenth centuries. Both private letters and business letters comprised extensive sequences that were repeated over and over again. In the first part of the talk, I will argue that there are clear distributional patterns underpinning the use of formulaic language in private letters, which can be explained with reference to the specific sociohistorical context. In the second part, I will introduce a recent case study where we shift attention to business letters, also comparing them to private letters. I will show that the set of formulaic phrases used in business letters is both similar to and different from the range of formulae used in private letters. One difference is the frequency of Romance-origin lexical items, and I will argue that the international register of business correspondence offered a channel through which French-origin items in particular entered the Dutch language.

This presentation will focus on the effects of multilingualisn in a series of late fifteenth-century English letters, especially the collection known as the Cely letters (1472-1488). The Celys were a merchant family based in London whose members exchanged business and personal letters with their associates (mainly mercers and wool producers) and with dependants working for them as factors at Calais: an English outpost in France since 1346 where staplers were forced by law to negotiate the sale of their products in the marts of the Low Countries. The majority of the letters in the collection are written in monolingual English; however, there is no doubt that they were produced and received in the resilient multilingual context of late fifteenth-century England, where written French still circulated extensively, as well as in the specific multilingual context of business transactions in London, Calais and the Low Countries where oral contacts between English, French and Dutch (as well as other languages) must have been the norm. This means that their authors were sensitive to other languages they were in contact with and this was often reflected in their writing. In my presentation I will consider the bilingual abilities of some of the correspondents as well as possible traces of French and Dutch in some of the ritualistic and formulaic conventions of the letters. I will draw instances of variation triggered by multilingual influence and will also notice some conditioning factors such as the location of the letter writer and his/her recipient or their respective social status and age.

Near the end of the 5th c. BCE, during the Persian rule of the Near East, local leaders of the Judean community at Elephantine in southern Egypt wrote a petition in Aramaic to the authorities in Palestine, asking for permission to rebuild their temple. The petition was found in different versions and as such gives valuable information on how such a document was drafted. In this contribution I will examine material aspects and specific formulas of the petition and the extent to which this letter agrees with other Aramaic letters from Elephantine and from the Persian empire at large.

Past lectures in this series:

Giuseppina di Bartolo (University of Cologne): “Where and How? Exploring request constructions and their position in Greek papyrus letters”

Epistolography is almost as old as writing itself. It is, however, far from static in its forms and usage. In the Latin tradition, it has been observed that orality played an important role in letter composition and reception. Scribes, messengers and the entourage of recipients played an active, even decisive part in the epistolary interaction. This field of inquiry calls for new work, and for the Middle Ages, the 9th-10th centuries offer interesting possibilities, as they left us with  the oldest letters on parchment kept in their original form. These have not been sufficiently studied from the perspective of their reception, and we will try to show how they can be of use in the first part of this presentation. These originals certainly do not tell the whole story, however, as we will demonstrate bu using examples of “angry” letters kept as copies, whose reception can hardly have been in line with what the originals suggest.

How did women in high positions address their male family members when they wanted to achieve political goals? 15th Century letters by duchesses and countesses residing in the Low Countries, like Jacqueline of Bavaria, Margaret of Burgundy and Isabel of Portugal, will serve as examples to discern different communication strategies, depending on the sender’s dynastic position and personality, as well as the political situation. Conventions in asking for favours and ways to communicate points of view will be discussed.

Yasmin Amory (Ghent University): Building a theory of material and visual politeness in ancient sources: the example of the Graeco-Roman letters on papyrus

Although letters on papyrus have been thoroughly examined and investigated from the very beginning of the discipline, attention has mainly been paid to the language and its formulations. Even if things have recently started to change and there is an evident, increasing interest in the material and visual aspects of writing supports, the main approach is still text-related. A similar trend can also be observed in the field of historical politeness: even when applied to documentary sources, politeness research exclusively focuses on the register and the linguistic strategies. However, the papyrological documentation reveals that politeness was not only conveyed and perceived through language, but also through the external characteristics of written communication (the choice and the conditions of the material support, the layout of the text, the style of the handwriting, …), and even through non-verbal and non-tangible communication. By introducing a theory of material and visual politeness, this paper aims to investigate communication practices in Graeco-Roman letters under a new multimodal perspective.

This presentation will focus on the so-called Tabaristan Pahlavi Documents (see Weber 2019 among many others), a corpus of Middle Persian documents from the area of Tabarestan, present day northern Iran, dating from the last decades of the Seventh century CE. While a great number of the documents are in fact minutes of court cases and rulings relating to disputes over land purchase and payment of taxes, quite a few are in fact petitions and letters of complaint exchanged around the adjudication of these cases. Written in variations of epistolary formulations known from other neighbouring regions and languages, these letters reveal much about the environment in which they were being composed and the understanding of power structures that regulated the lives of their authors. This presentation will contextualise such letters and by comparing them with similar finds from Qom, Bactria, and Egypt, provide a study of their human environment and context.